This site has limited support for your browser. We recommend switching to Edge, Chrome, Safari, or Firefox.

Can You Take a Pocket Knife on a Plane?

Pocket knives are among the most versatile everyday carry tools. While it can be tempting to carry your pocket knife everywhere, many establishments and regulatory bodies restrict knives, including airports and the TSA. Can you take a pocket knife on a plane?

If you want to bring a pocket knife while traveling by plane, the first step is to become aware of the relevant laws and regulations.

Who Regulates Knives on Planes?

The Federal Aviation Administration (FAA) and the Transportation Security Administration (TSA) are the primary entities responsible for overseeing and enforcing knife regulations on planes in the United States.

After 9/11 and the passage of stricter airport security rules on September 13, 2001, the FAA imposed a total ban on knives inside a plane's cabin, regardless of size or blade material. This change came alongside several other measures aimed at improving airport security. Previously, carrying knives with a blade length under 4 inches, such as traditional Swiss Army knives, was legal.

The TSA announced in 2013 a rule change proposal that would have allowed non-locking knives with blades under 2.36 inches in length. However, significant pushback from multiple entities, including the Association of Flight Attendants (AFA) and multiple congresspeople, resulted in the proposal's abandonment.

The FAA Reauthorization Act of 2018 (HR 302) was signed into law on October 5, 2018, including the No Knives Ever Again provision, stipulating the TSA no longer has the authority to amend knife rules and authorize knives in an airport's sterile areas or inside aircraft cabins.

As of October 2022, the 2001-era total ban on knives inside plane cabins remains in force. 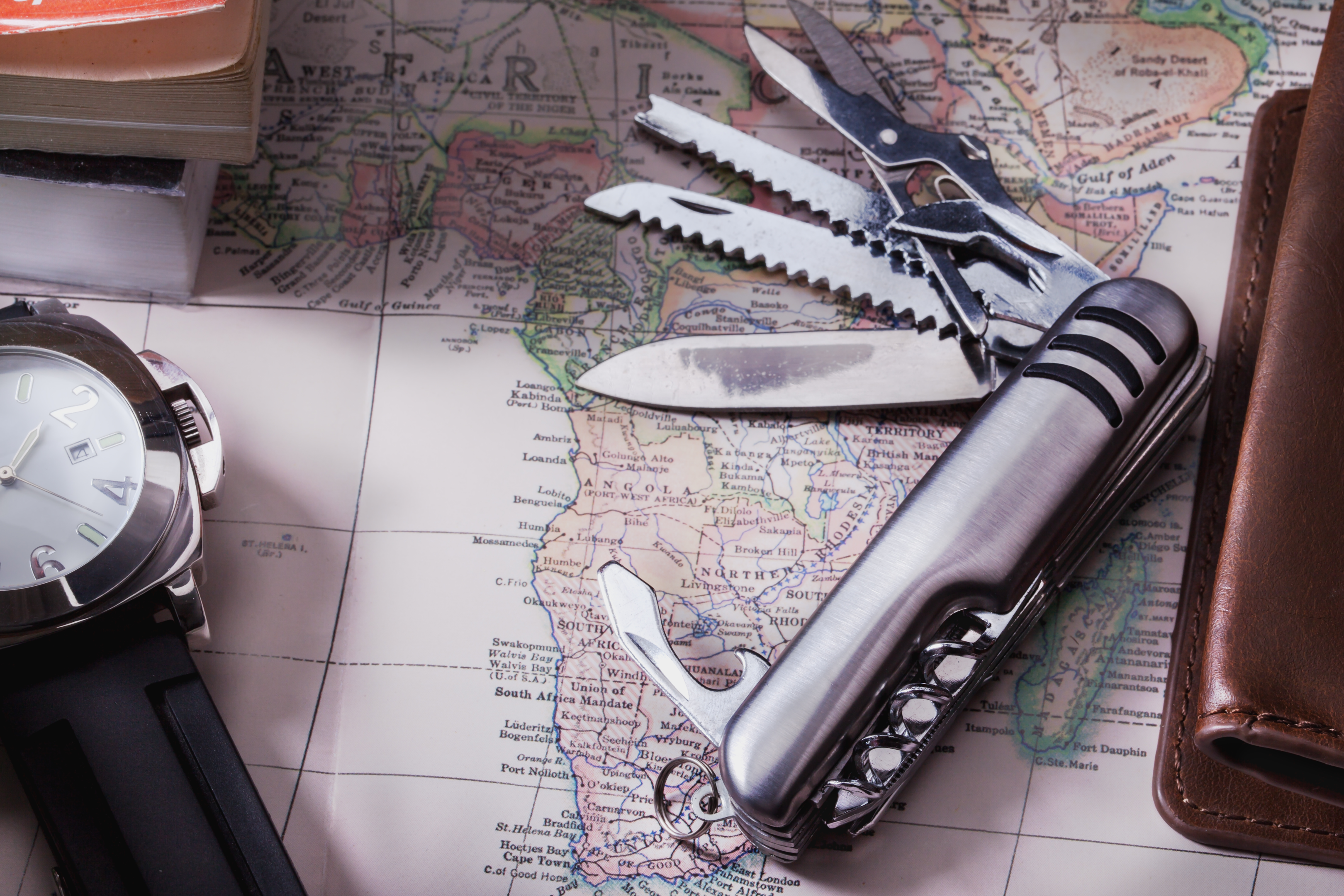 Can I Bring a Pocket Knife on a Plane?

According to the TSA and all current laws, travelers may not bring any knife, bladed weapon, or any other sharp object inside the cabin of any commercial aircraft, including carry-on baggage, except for plastic butter knives or round-bladed butter knives.

Contrary to popular belief, there is no such thing as a "TSA-approved knife," as there are for containers, toiletry bags, and luggage locks.

If TSA personnel discovers banned items inside an individual's carry-on baggage in a prohibited area, the agency may impose civil penalties of up to $13,910 per violation per person. Prohibited areas include security checkpoints, inside an airport's sterile area, or an aircraft cabin.

While travelers may not carry any knife on a plane in carry-ons, specific types of knives, bladed implements, and other sharp objects are prohibited. Bringing these items in your carry-on places you at risk of a civil penalty.

According to the TSA website, you risk a fine ranging from $360 to $2,090 if a TSA officer finds any of the following knives and bladed objects inside your carry-on bag:

What Happens to Confiscated Knives?

If TSA agents confiscate items from travelers, the rules stipulate these items become the federal government's property. Most confiscated items are typically disposed of, donated to other organizations, or sold off at auctions.

Pocket knives are among the items the agency most commonly sells or auctions due to their durable nature. TSA typically packages items of the same type (e.g., bundles of small knives, Swiss Army knives, etc.) and uses platforms such as GovDeals.com, PublicSurplus.com, or GSAAuctions.gov to sell or auction them off.

Can I Transport a Pocket Knife in Checked Baggage?

While the 2001-era ban on knives in carry-on luggage remains in force, it is possible to travel by plane with a pocket knife if you leave it in checked baggage. This method is the only way to bring a pocket knife or a blade without breaking TSA regulations.

The TSA doesn't impose any limits on the knife type, material, or blade length that can be transported inside checked bags.

However, the TSA imposes a few rules and regulations that travelers must observe when transporting pocket knives, blades, and other sharp objects in checked baggage. The "What Can I Bring?" section of the TSA website states that all sharp objects should be sheathed or wrapped securely to protect baggage handlers and inspectors from potential injuries.

While TSA doesn't specify what constitutes acceptable sheathing or secure wrapping, TSA may disapprove of transporting a pocket knife or any other bladed implement with an exposed edge.

Do I Have to Declare My Pocket Knife?

TSA regulations require travelers to declare any firearms and ammunition transported in checked baggage. However, these rules do not apply to bladed objects like your pocket knife.

Whether your bag contains a small pocket knife (e.g., Swiss Army knife) or a large fixed-blade hunting knife, the rules do not require you to declare knives to TSA agents. The agency's only requirement is to keep your pocket knife and other sharp items sheathed or securely wrapped. 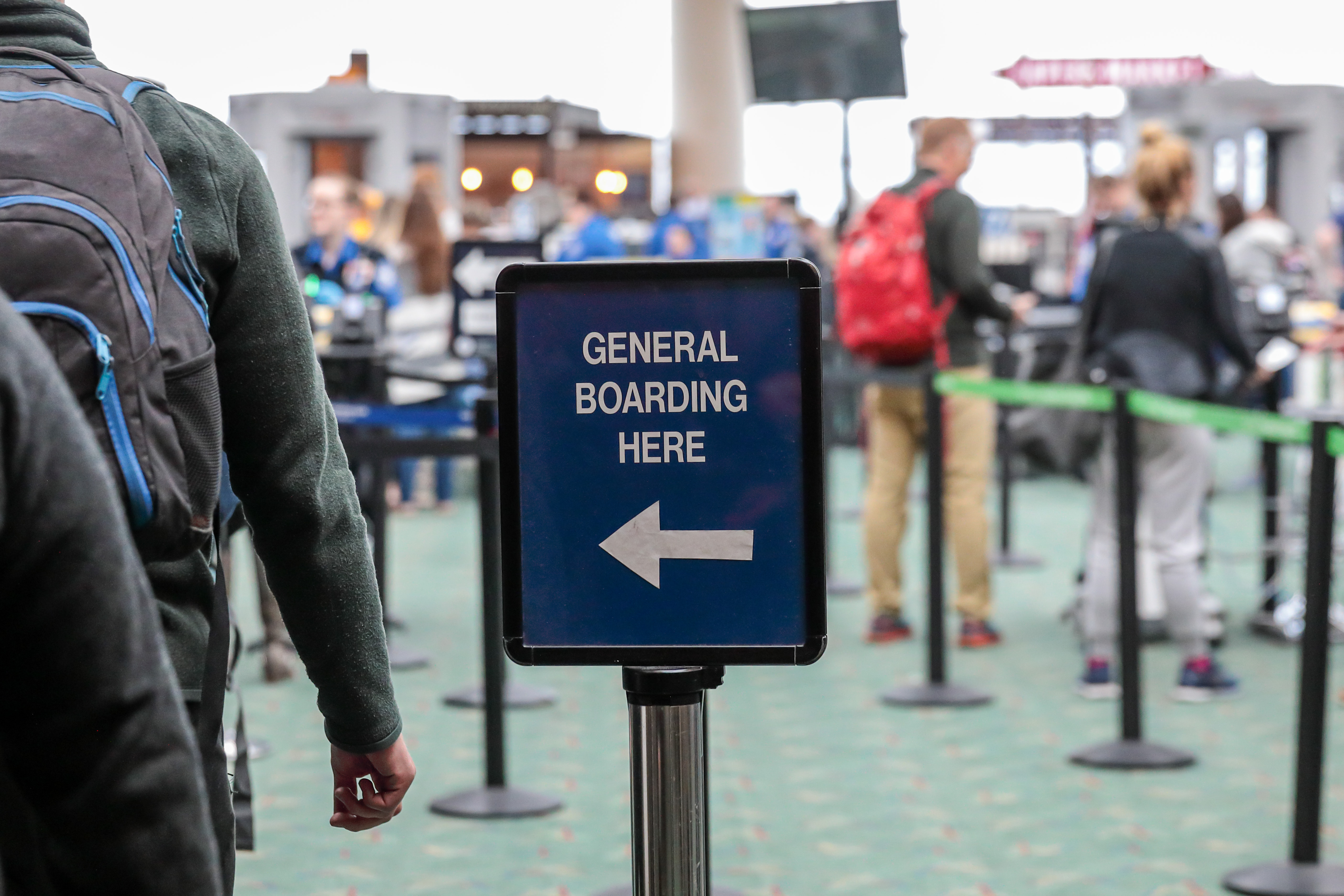 Can I Travel Internationally With a Pocket Knife?

Although TSA officers may let you through if you follow all regulations and keep your pocket knife properly sheathed, folded, and stored in a checked bag, it does not guarantee that your knife is legal for you to possess or carry at the destination airport.

For example, when boarding an international flight from Dallas, Texas, to Berlin, Germany, even if your pocket knife is legal for you to possess in Texas, German knife laws may consider the same knife illegal to possess or carry in public. According to the German Weapons Act (WaffG), specific types of knives fall under the legal definition of a banned weapon (may not possess or carry):

Find the Most Reliable EDC Pocket Knives at Uppercut Tactical

At Uppercut Tactical, we offer American citizens the best selection of pocket knives, tactical knives, and other EDC gear at the most affordable prices possible. Our values are guided by preparedness and patriotism, from product selection to customer care.

Whether you prefer fixed-blade knives, folding knives, or OTF knives, we have a product for you. Browse our extensive selection of knives today and find the ideal blade for your needs.

This information is presented as a brief synopsis of the law and not as legal advice. Uppercut Tactical is not a legal service provider. Use of the site does not create a lawyer/client relationship. Laws are interpreted differently by enforcement officers, prosecuting attorneys, and judges. We suggests that you consult legal counsel for guidance.

Stay up to date with the new collections, products and exclusive offers.

How Does an OTF Knife Work?

Wondering how an OTF Knife works? We break down the mechanism, so you can feel secure knowing your OTF is built to fire smoothly every time.
Knives Self defense

Carrying a Knife for Self-Defense

Find out everything you need to know about self-defense with knives and what are the critical aspects to consider before carrying.
Close
Close